Manchester United manager Louis Van Gaal, spent over £150 million during the January transfer window and it is widely expected that he will do the same in the summer as well.

If we go at the rumours, there are many players across Europe, who have been linked with a move to the 20-time English champions – amid those speculations Manchester Evening News conducted a poll to know which Playing eleven, that United fans want to see next season.

Have a look at the Manchester United playing 11, that fans are praying for next season. 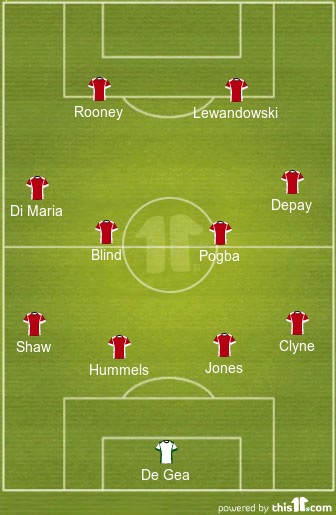 With likes of Paul Pogba, Robert Lewandowski, Mats Hummels, Nathaniel Clyne and Memphis Depay making their way to the playing 11 for the Red Devils next season.

Indeed – all of the above names have been reportedly linked with a move to Old Trafford over the last couple of months.

But, it remains to be seen how Van Gaal and Ed Woodward go about fulfilling the dream of their fans and give them a desired playing 11 for 2015/16 season.