Your favourite Premier League team is kicking off soon. You have your pre-match snacks and drinks, you’ve checked the Premier League Odds, and you’re in a prime position in the pub, stadium, or living room. Just before kick-off, the whistle goes and the players take a knee. There are some boos, which are drowned out by a lot of applause. This has actually become a common sight around Premier League grounds and has caused a mixed reaction from fans on social media and in stadia. But why? And is taking the knee a good thing or not?

History of Taking a Knee

The gesture first came to prominence in the US in 2016. NFL star Colin Kaepernick took a knee during the national anthem, after saying he could not show pride in the flag of a country that oppressed black people. Kaepernick’s teammate Eric Reid, who also kneeled, said “We chose to kneel because it’s a respectful gesture. I remember thinking our posture was like a flag flown at half-mast to mark a tragedy.”

Kaepernick suffered heavy criticism and was released by the San Francisco 49ers in 2017. Since then, taking a knee has become a popular method of peaceful protest and, despite continuing throughout the US, came to worldwide prominence in 2020.

On Monday, May 25th, 2020, police officer Derek Chauvin murdered George Floyd. The video of Chauvin kneeling on Floyd’s neck went viral and sent shockwaves through the world. Black Lives Matter protests sprung up in towns and cities all over the world, demanding societal change, police reform, and an end to institutionalised racism. Controversy has at times surrounded the BLM movement, fuelled by disinformation and political propaganda. As a response to the murder of George Floyd, and as a show of solidarity, Premier League players began to take a knee. 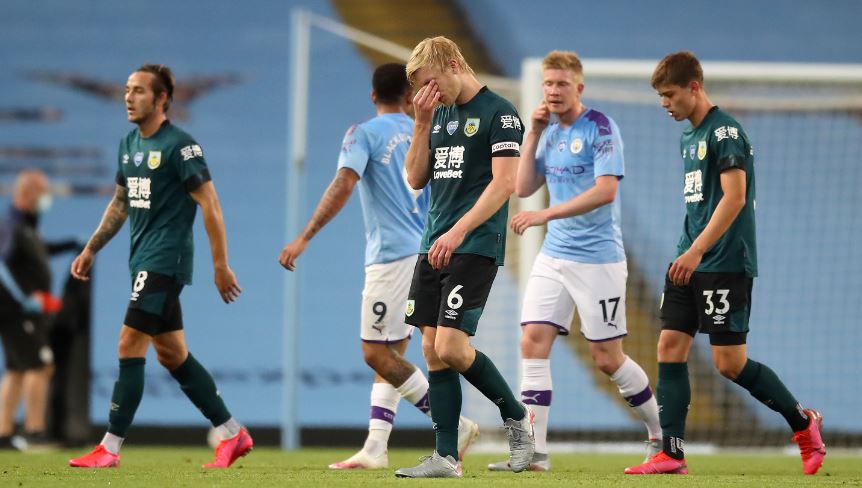 Reaction to Taking a Knee

Very soon after Premier League players began their support for Black Lives Matter, critics reacted. In June 2020, during a match against Manchester City, some Burnley fans flew a plane over Turf Moor with a ‘White Lives Matter Burnley!’ banner attached to the back. The direct and obvious criticism of the support shown to BLM by the taking a knee gesture, although by a minority, was loud. Burnley captain Ben Mee was equally loud and clear in his post-match interview, “I’m ashamed and embarrassed that a small number of our fans have decided to put that around the stadium…it doesn’t represent what we’re about, what the club is about, what the players are about and what the majority of the fans are about. It’s a small minority of people and I’m really upset that it happened.”

Protests have continued during the entire period of taking the knee, and even more so once fans were allowed back into stadiums. The England national team took a knee in warm-up games for Euro 2020, and some fans took their first opportunity at being back inside a football ground to boo the gesture. England manager Gareth Southgate calmly responded after the game, “I think we have got a situation where some people seem to think it is a political stand that they don’t agree with it. That is not the reason the players are doing it. We are supporting each other.” This has been the central crux of opposition to taking a knee; taking it as a perceived radical political movement rather than a strong anti-racism protest. Mentions of Marxism and socialism are thrown around without any real basis in fact. As inew.co.uk‘s Daniel Storey puts it, some vocal critics of anti-racism “wilfully use the same explanation as a shield, deflecting away criticism.”

Some Premier League stars have stopped taking a knee before games. Crystal Palace forward Wilfred Zaha called the gesture “degrading” while Brentford’s Ivan Toney has said he feels that players are used as “puppets” and that kneeling before games allow “people at the top” to rest on their laurels and consider the anti-racism job done. Similarly, QPR Director of Football Les Ferdinand claimed the gesture had run its course, “The message has been lost. It is now not dissimilar to a fancy hashtag or a nice pin badge.” QPR players stopped taking a knee and Zaha and Toney continue to stand while others kneel before a match.

At its heart, taking a knee is an anti-racism gesture; a show of defiance and a recognition that a lot of work is still to be done. By its very nature, it will, and has, upset racists and those who hold racist views. A survey released in summer 2021 polled fans across Europe about their feelings with regard to taking a knee. Mainland Europe, including Portugal (79%), Italy (73%), Spain (71%), and Germany (60%), all showed support. 59% of fans in England also supported the gesture, but 39% actively opposed taking a knee. There is a clear divide on taking a knee in England, but as Fare executive director Piara Power put it, “The racist backlash against the Black Lives Matter movement across Europe is a trend we have seen and documented…(this) can only be motivated by racism and a denial of equal rights. It shows exactly why the fight for equality is so important and why the majority of people have supported it.”