The 16th edition of the European Championship, Euro 2020 is into its final stage. Italy and England will face off at Wembley Stadium in London on July 11 for the continental crown.

Pre-owned watch specialist Watchfinder & Co. has compiled an impressive league table for the tournament, pitting the marvelous watch collections of each team against each other. And it’s not England, France or Italy topping that table. 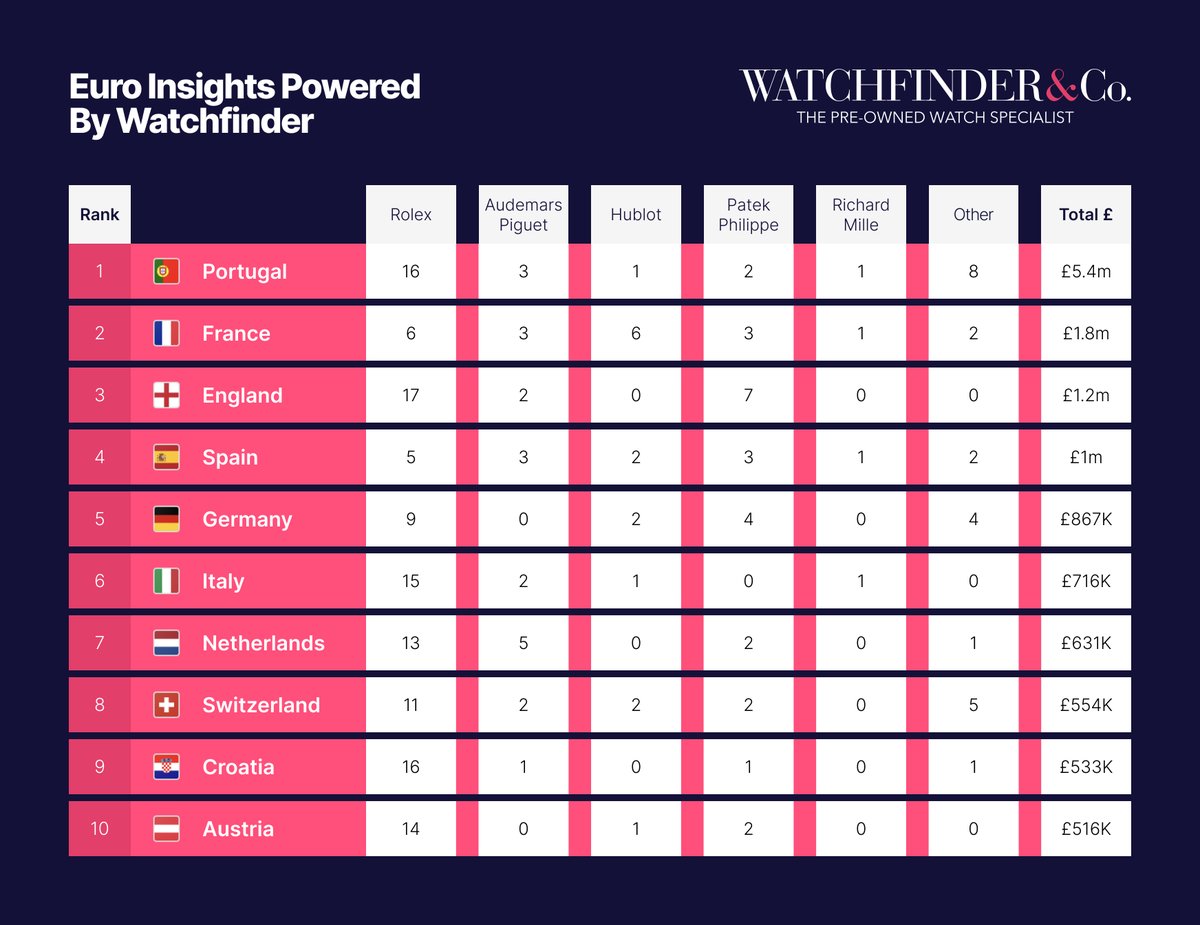 The clear winner is the reigning champions Portugal with a watch collection estimated to exceed at least £5.4m. With superstars like Cristiano Ronaldo, whose personal collection includes a Franck Muller Cintrée Tourbillon and a diamond set Breguet Double Tourbillon (estimated to be worth a whopping £1,000,000 and £560,000 respectively).

France clinched second place, with an impressive collection of over £1.9 million. The pair Paul Pogba and Ousmane Dembele share an affinity for rare and expensive Patek Philippes. Dembele owns a 5976 white gold Patek Chronograph, and Pogba has been spotted wearing an “iced out” factory diamond set 5719 Nautilus model in white gold. These two watches alone are valued at approximately £700,000.

England in third place with a collection is estimated to be worth £1.8 million. With 17 Rolexes of the team’s collection. Other precious pieces in the squad ‘cabinet’ include Harry Kane’s 5164R Aquanaut Travel Time and a 5980R Nautilus Chronograph worth an estimated £265,000. Marcus Rashford is in possession of an exceedingly sought after Richard Mille RM35-02 (aka the Nadal) this watch alone is valued at around £360,000.

Spain come in fourth with a collection valued at just over £1 million. Clearly, the Spanish go for the classics, with Rolex GMT’s, Audemars Piguet Royal Oak’s and complicated Patek Philippe’s making up half of the teams watches. Thiago Alcantara (like England’s Rashford) shares a taste for Richard Mille and also has an RM35-02 “Nadal” valued at around £360,000.

Germany are in fifth place with an estimated watch collection of near £870,000. With over half of Germany’s collection made up by watches from Patek Philippe, mostly steel iterations of the recently discontinued 5711 Nautilus which known for being incredibly hard to acquire.

Swiss midfielder Steven Zuber has a serious passion for vintage Rolex and has been spotted sporting a rare example of the Rolex GMT 1675 “Cornino”. Finnish player Paulus Arajuuri lets design guide his watch selection with his collection including a Casio W-59 digital in gold. Lorenzo Insigne from the Italy squad is a clear Richard Mille fan, often seen sporting the impressive RM 11-03 Titanium flyback chronograph model, valued at an eye watering £250,000.

Footballers have long been recognised for their expensive watch collections and we thought this year’s Euros was the perfect opportunity to establish which national team really does have the most valuable collection. The list won’t be exhaustive as we are certain these players have even more extraordinary timepieces hidden away at home but it’s been fascinating looking at the personal taste and style of each player – a great reminder of how diverse the watch industry is. With Ronaldo in their squad it was no real surprise that Portugal topped the table this year, his personal watch collection exceeds £4.5 million and will no doubt continue growing. Rolex also unsurprisingly took the lion’s share with an average of 10 watches per squad in the top 10. Germany had a few less Rolex but had the largest variety of brands in the top 5 with makers such as IWC, TAG Heuer, and Hublot appearing on their wrists.